History Skills provides you with a wide range of explanations, examples and scaffolds in order to help you get the most out of the subject.

Whether you need to develop your historical knowledge, learn source criticism skills, prepare for essays and exams, understand how to quote and reference sources, or even need to find primary and secondary sources online, you will find everything you need.

Two Part series tracing the history of apartheid in South Africa. The program covers the earliest settlements, the Boer War, legalisation of the apartheid system and the repression of black resistance. Covered also - the escalating violence between Inkatha and the African National Congress, the rising influence of the Afrikaner movement, the resignation of Botha and the release of Nelson Mandela.

Two Part series tracing the history of Apartheid in South Africa. Documents - the escalating violence between Inkatha and the African National Congress, the resignation of Botha and the release of Nelson Mandela.

Madela the prisoner, de Klerk the president, two men from different worlds, often at loggerheads, who came together to end apartheid in South Africa.

(22 Apr 1994) Zulu chief Mangosuthu Buthelezi, late entrant in South Africa's historic election, said on Friday he would not serve in a government of national unity even if his party won enough votes.

South Africa's successful struggle for freedom and democracy is one of the most dramatic stories of our time. The racial tyranny of apartheid ended with a negotiated transition to a non-racial democracy, but not without considerable personal cost to thousands of men, women, and young people who were involved.

Our Vision is a Democratic Society, 1958

History of elections in South Africa

The UNESCO Digital Library is a key tool for enabling UNESCO’s mission of building peace in the minds of people, in particular by “advancing the mutual knowledge and understanding, and encouraging cooperation among the nations in all branches of intellectual activity, including […] the exchange of publications, objects of artistic and scientific interest and other materials of information.

Facing History and ourselves

As negotiations between the National Party and the ANC became public in the early 1990s, South Africans began to imagine a democratic future. Leaders of the anti-apartheid struggle sought to create a government that reflected the country’s diversity, transforming a state long committed to white supremacy into what many began to describe as a “rainbow nation.'

When, in 1989, F. W. de Klerk was appointed leader of the National Party of South Africa, few people expected any sudden reversal of the policy of apartheid (“apartness”) that national governments had imposed on the nation’s non-white populations for nearly four decades.

The elections of April 1994 signaled a major breakthrough in South Africa. Political control was shifting from the white minority to the black majority. Only a few years ago, many observers of South Africa were predicting that only a bloody revolution could overturn the brutal white-controlled government. But in a remarkable turn of events, a black leader imprisoned for 26 years and a white leader willing to change worked together for a new South Africa. 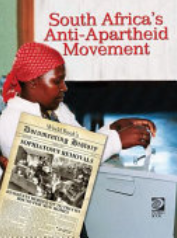