Christianity and Social Welfare in Australia- Settlement to 1945: Home

In a nation where governments and churches have collaborated in the delivery of welfare services since 1788, such faith-based welfare was seen as normative rather than problematic. Indeed most Australians would struggle to imagine a welfare system that was not built on such an arrangement.

The people of Australia expect the Churches to be active in the care of people, whether they are members or not. This expectation has been formed, not only by the Churches delivering ministries of care over the centuries, but also by the imperatives contained within the teachings of the Christian tradition.

Challen, Michael B. The changing roles of Church and State in Australian welfare provision [online].

Abstract The present article re-examines several aspects of the early history of Australian social work. Using primary sources that recently underpinned a PhD thesis, the paper suggests that the traditional historical interpretation of the roles of the Charity Organisation Society.

In this paper, I provide an account of the development of church-related social welfare agencies from European settlement to the commencement of the contracting era in the 1990s

Hynd, D., 2017. Church-related social welfare agencies in Australia: A historical perspective on their development and their relationship with the state. Zadok Papers, (220/221), p.10.

There is considerable international literature on contemporary relations between church and state in the provision of welfare services. Often this literature focuses on the dilemmas and tensions involved, as faith-based agencies find themselves contracted to deliver services in ways that may limit their autonomy and compromise their sense of mission.

McMahon, A., 2003. Redefining the beginnings of social work in Australia. Advances in Social Work and Welfare Education, 5, pp.86-94.

Church related agencies are major providers of community services in Australia (Lyons, 2001:34-35). While the history of church related welfare service provision is not well known in Australia it is asserted that many have a long tradition of outreach and service provision to marginalised groups regardless of the government social policy of the day. 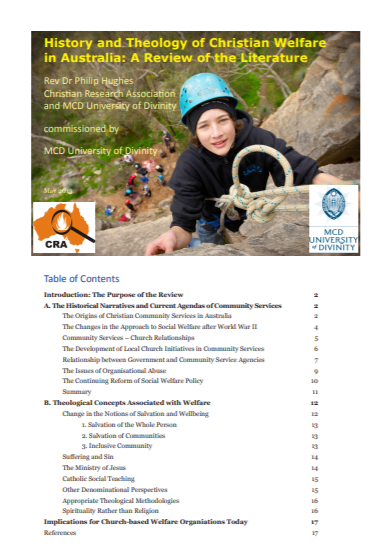 The Catholic Church is a significant provider of social welfare across Australia. Less well known is the history of these services and also the individual and collective contribution of Catholics in the wider professionalization of welfare practices