This past week, the Metropolitan Museum in New York announced it will return 19 small objects from King Tut's tomb to Egypt. Now the Egyptians are asking the British to return the Rosetta Stone. 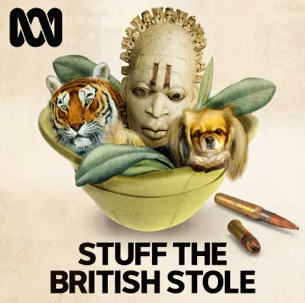 The Gweagal shield is just one of the things James Cook and his shipmates took from the local people when they landed in Botany Bay. Why has it become the most contentious?

The arrival of Europeans in NZ kicked off a trade in Mokomokai — tattooed heads but these colonial souvenirs have their own complex history. 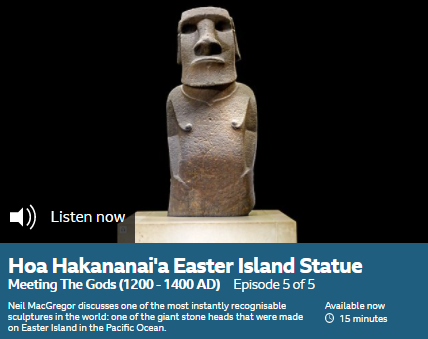 This statue known as a moai comes from the Island of Rapa Nui, also known as Easter Island. Rapa Nui in the Pacific Ocean is one of the most remote inhabited islands in the world. Polynesians first settled on it before AD 800. Around 1000 moai were carved, probably to commemorate important former chiefs who were revered as divine. By 1600 the islanders ceased to make moai and they began to topple and even bury some of them.

Historian and author William Dalrymple and BBC journalist Anita Anand join us to discuss their new history of the Koh-i-Noor, the famed Indian diamond, which was controversially brought to Britain in the 19th century.

Activists say symbols of resistance taken when Captain Cook’s men first encountered Indigenous people in 1770 must come home, and not just on loan.

Aboriginal remains were stolen in Australia and illegally exported worldwide until the late 1940s. Their journey home is long and arduous. Many museums and scientific institutions resist returning them.

This paper aims to explore how stolen Indian antiquities were purchased by a major Australian collecting institution, despite cultural protection policies designed to prevent such inappropriate acquisitions. Using the acquisition of the Dancing Shiva as a case study, the purpose of this paper is to examine how collecting institutions such as the National Gallery of Australia experience difficulty when determining legal title through provenance research.

Repatriation: why Western museums should return African artefacts- A large number of artefacts held in Western museums and libraries are known to have been appropriated over the ages through conquest and colonialism. The looting of African objects by anthropologists, curators and private collectors took place in war as well as in peaceful times. It was justified as an act of benevolence; as saving dying knowledge.

Who owns the bones? Human fossils shouldn’t just belong to whoever digs them up- Fossils hold invaluable information about human history. But digging deeper, there is much complexity around the question of what a “fossil” is, and who should be granted ownership of them.

Making kin not cash: repatriations of substance cannot be made on terms that solely suit European museums Jesus College Cambridge announced that it will return a bronze to Benin, which was looted by British forces in 1897. As more institutions engage with repatriation, we have to interrogate its value and explore what other systems of relations and artistic production we can learn in the process.

Easter Island statues: international law is shifting against British Museum - Hoa Hakananai’a is one of the most spiritually important Moai of all. He left Easter Island in 1868 when Captain Richard Powell, commander of the British frigate HMS Topaze, took him without permission. Powell gave the statue to Queen Victoria, who donated him to the British Museum. It has resided there ever since.

US museums hold the remains of thousands of Black people Among the human remains in Harvard University’s museum collections are those of 15 people who were probably enslaved African American people. Earlier this year, the school announced a new committee that will conduct a comprehensive survey of Harvard’s collections, develop new policies and propose ways to memorialize and repatriate the remains.

Descendants are calling for the return of a priceless indigenous shield that was stolen by one of Captain Cook's men in 1770. The ancestral artifact is on display at the British Museum, but UK law prevents it from being returned to Australia.

Representatives from the Chilean territory of Easter Island are in London seeking the return of a statue brought to the United Kingdom 150 years ago. The carving, which has a name meaning "the one that brings calm", was taken from the Pacific island in 1868 by a British explorer.

How did the West African artworks known as the Benin Bronzes end up in European museums? And why does it matter?

Kohinoor is one of the most famous Diamond in the World. However there are historical scholars who think that this Diamond is cursed. Is it true? Do we have historical facts to prove this?

French parliament are to decide if Maori heads should be returned to New Zealand Te Karere Maori News TVNZ 1 Apr 2010.

Institutions are under pressure to return the spoils of empire, but doing so is far from simple.

Disputes over the retention of human remains in museums and other collections are further exacerbated by the common law’s limited recognition of the human body and its parts as property. 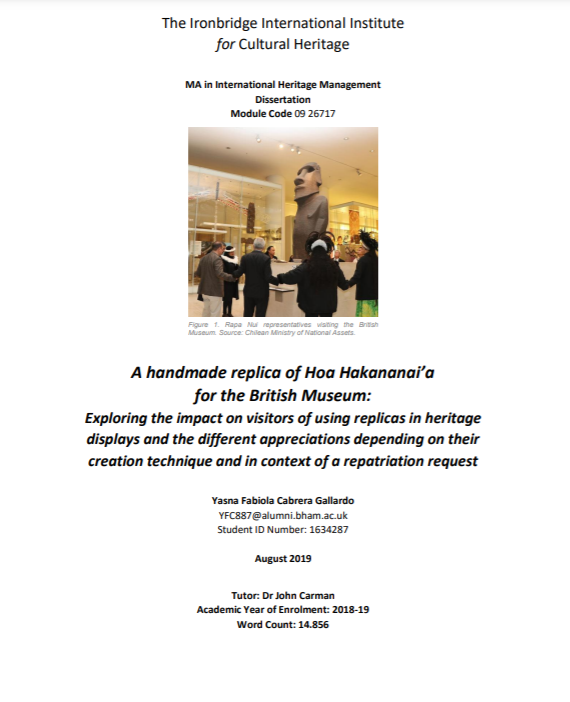 Replicas in heritage displays can be recognised, on the one hand, as beneficial because they enable visitors to see objects from different parts of the world, with no need to take them out of context. On the other hand, reproductions can be seen as something unfavourable, because the public cannot be in contact with the original object, with all the history that it contains and all the epochs it has experienced. By contrasting visitors’ experience of the Moai Hoa Hakananai’a in the British Museum (original Moai), with the one of the Dublin-Moai in the Clontarf Promenade (replica), this research attempts to explore the relevance for heritage visitors to see a replica on display as a replacement of an original object.

HOA HAKANANAI'A: A NEW STUDY OF AN EASTER ISLAND STATUE IN THE BRITISH MUSEUM

Hoa Hakananai’a is one of the best known and most viewed of all the Easter Island statues. Taken from the remote Pacific island in 1868 and delivered to the British Museum the following year, it has been on public display in central London almost without a break for more than 140 years.

The big question: should museums return their treasures? Amid calls for the ‘return’ of artifacts such as the Benin Bronzes, the Elgin Marbles, and art looted by the Nazis during the Second World War, now held in museums far from their places of origin, four experts discuss the ethical and historical aspects of the ‘restitution’ of such treasures.

Britain's African empire in the nineteenth century was both extensive and ruthless. The empire was responsible not only for the colonies' loss of minerals and land, but also for the subjugation of the local people. In many cases, this included the looting and transfer of the colonized people's cultural property to Britain. Looting was an economic tool, but it was also a means for the colonial power to assert dominance over the colonized people through erasing cultural identity and instilling a sense of inferiority among the subjugated.

British Museum is the world's largest receiver of stolen goods, says QC-Geoffrey Robertson says it should ‘wash its hands of blood and return Elgin’s loot’

Soldier's grandson to return items he looted from Benin City- Ceremonial paddles to be displayed at Oxford museum before restitution to Nigeria.

Museums and looted art: the ethical dilemma of preserving world cultures- How can western ‘universal’ museums acquire and display artifacts without stoking the illegal arts trade and reproducing colonialist narratives?

The Guardian view on the restitution of cultural property- The world in 2019: The vexed politics of our times has obscured the view ahead. Over the holidays we will examine some big issues on the horizon. Today we look at a cultural right to return.

Do Historical Objects Belong in their Country of Origin? Four historians consider one of the most contentious questions facing the West’s museums and galleries.