Picture Climate: How Pollen Tells Us About Climate

The study of past climate change is pivotal to better understand current climate change (Tzedakis et al., 2009) and its impact on terrestrial ecosystems, particularly at the midlatitudes, where human activities are concentrated. It is well established that the study of fossil pollen contained in sediments fundamentally contributes to the reconstruction of terrestrial palaeoenvironmental changes that occurred during the Quaternary, and constitutes the only quantitative proxy that can provide continuous and accurate representations of vegetation changes.

Paleoclimatology is the study of past climates. Since it is not possible to go back in time to see what climates were like, scientists use imprints created during past climate, known as proxies, to interpret paleoclimate. Organisms, such as diatoms, forams, and coral serve as useful climate proxies. Other proxies include ice cores, tree rings, and sediment cores (which include diatoms, foraminifera, microbiota, pollen, and charcoal within the sediment and the sediment itself). 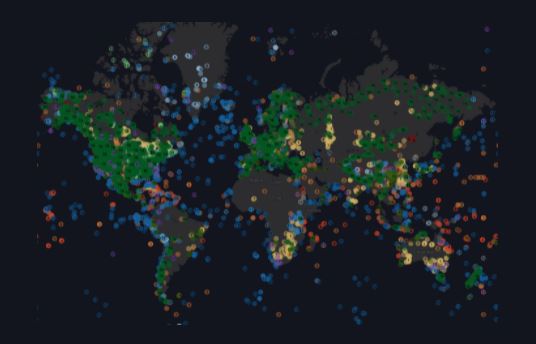 From the ice sheets of Antarctica and the seabed of the Atlantic, to the boreal forests of Europe and corals of southeast Asia, proxy data is found across the Earth’s land and ocean.

NOAA holds an archive of more than 10,000 proxy datasets covering more than a dozen categories. With its permission, Carbon Brief has mapped this data.

Use the categories in the legend on the left to select a particular proxy or archive type, and the buttons in the top-right hand corner to zoom in and out. Clicking on an individual data point will reveal the period covered by the data, the site name and a link to NOAA’s reference webpage for further information.

We don't need a time machine to learn from the past (but let us know if you find one)! Air bubbles trapped in ice for millennia and ancient pollen grains can tell us a lot about climate shifts hundreds of thousands of years ago!

Ken Ridgway tells us that in order to understand how the world works, we have to be able to study sedimentary rocks, and looking at an active area now helps us see what might have happened in the past. He sets up camp in active earthquake areas of Alaska and intensively researches the sedimentary rocks to discover clues to the past and make connections to today’s world. Ken Ridgway is a researcher and Professor of Geology and Geophysics in the Department of Earth, Atmospheric, and Planetary Sciences at Purdue University.

Scientists are hoping to unlock the mysteries of climate change by studying pollen thousands of years old Sally Kidd talks to University of Maryland Center for Environmental Science's Matt Fitzpatrick and Dave Nelson about their research.

Scientists perform fossil pollen analysis to learn how vegetation (and often climate) has changed over the last several thousand years. This video explains how it's done and how it works.

What sediment cores from the world's oceans reveal about climate patterns.

Few terrestrial archives offer multi-proxy information with temporal and spatial coverage comparable to marine palaeo-records. Pollen assemblages that are preserved in terrestrial sedimentary systems are, however, one such source. They offer palaeoecologists an archive from which to gain insight into past environmental change and associated vegetation dynamics, typically extending back many thousands of years.

Mangroves are biogenic systems that accumulate sedimentary sequences, where cores can provide records of mangrove species variation in
distribution with past climate change and sea-level change. Fossil evidence used for palaeoecological reconstruction is based on organic remains  thatpreserve identifying features so that they can be identified to generic levels at least. This includes macrofossils such as fruit, flowers, wood or leaves, or microfossils particularly pollen.

Palynology is a century old science and there are many opportunities for its practical application. The study of the symmetry, polarity, shape, size, structure, sculpture and of the apertures of the sporoderm can be very useful to many other sciences. Pollen is an indicator which enables researchers to study the phytogeography of the past, plant evolution, climates, rock and soil characteristics, air pollution levels, plant-insect relationships and the botanical and geographical origin of bee products .

Fossil pollen records are well-established indicators of past vegetation changes. The prevalence of pollen across environmental settings including lakes, wetlands, and marine sediments, has made palynology one of the most ubiquitous and valuable tools for studying past environmental and climatic change globally for decades.