Tay-Sachs disease is a rare, neurodegenerative disorder in which deficiency of an enzyme (hexosaminidase A) results in excessive accumulation of certain fats (lipids) known as gangliosides in the brain and nerve cells. 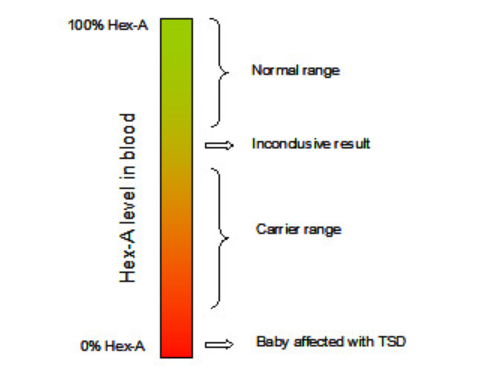 Nathan Harney had Tay-Sachs Disease, a fatal neurodegenerative disease that can be passed on to children when both parents are carriers of an altered gene. Babies born with Tay-Sachs disease appear normal at birth, and symptoms of the disease do not appear until the infants are about four to six months of age when they begin to lose previously attained skills, such as sitting up or rolling over. Children then gradually lose their sight, hearing and swallowing abilities. These children usually die by the age of five. In the past, Tay-Sachs was often thought of as a Jewish genetic disorder due to its large presence among Ashkenazi Jews. But, cases of Tay-Sachs have been identified in the Irish population in Philadelphia over the last few years.

Tay-Sachs disease is an autosomal recessive, progressive neurodegenerative disorder which, in the classic infantile form, is usually fatal by age 2 or 3 years.

The most common form of Tay-Sachs disease becomes apparent in infancy. Infants with this disorder typically appear normal until the age of 3 to 6 months, when their development slows and muscles used for movement weaken.

Tay-Sachs is a genetic disorder caused by the absence of beta-hexosaminidase (HexA). This missing enzyme causes cells to become damaged, resulting in progressive neurological disorders. A cure for Tay-Sachs does not yet exist but there are many strategies for managing life with Tay-Sachs.