The shape, size and purpose of the medieval castle has changed over time. This page describes the changes that took place.

Work started in 1997 on reconstructing an authentic medieval castle in France, using only the tools and materials available in that era. Medieval life is re-created within the castle walls.

This episode the team are defending the castle. Ruth, Tom and Peter explore the art of medieval combat and the building of the castle's defensive structures.

This episode, the team delves deeper into the secrets of the skilled communities who built medieval castles.

Beyond the caslte walls.

The castle as we know it today was introduced into England in 1066 during the Norman invasion led by William the Conqueror. After their victory at the Battle of Hastings, the Normans settled in England. They constructed castles all over the country in order to control their newly-won territory, and to pacify the Anglo-Saxon population.

Medieval castles were built from the 11th century CE for rulers to demonstrate their wealth and power to the local populace, to provide a place of defence and safe retreat in the case of attack, defend strategically important sites like river crossings, passages through hills, mountains and frontiers, and as a place of residence.

Castle designs have changed over history. This is because of changes in technology over time – as well as changes to the function and purpose of castles. 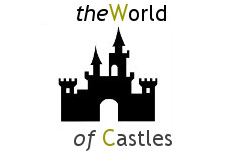 Ask anyone to visualize the Middle Ages and, almost inevitably, they will come up with the image of a castle. Castles are some of the most popular historic sites on the planet and, together with the great cathedrals, they are one of the most evocative features of the Medieval Age.

Castles exert a powerful hold on our imagination. They embody the romantic ideal of chivalry, of epic battles, of loyalty and personal sacrifice to crown and country.

An extensive network of castles allowed the Normans to secure their power in England. The small force of invaders used these large fortresses to impose their authority over a whole country.