Decline and Fall of the Romanov Dynasty: Bloody Sunday

Following the emancipation of the serf social class in 1861 there was massive urbanization into the industrial cities of Russia. Populations swelled and the living conditions were crowded, diseased and dirty. This new proletarian social class complained of long working conditions and low pay. To make things worse, Russia was busy losing the Russo-Japanese War against Japan, having just surrendered Port Arthur. In January 1905 Father Gapon to lead a protest march to the Tsar's Winter Palace. He attempted to deliver a letter to the king respectfully requesting his help. Gapon and his 3000 followers were met by Cossacks who massacred the crowd. As a consequence of the massacre 300,000 proletariat went on strike by the end of January. Farmer serfs rioted, killing their aristocratic landlords and burning property. The Tsar's uncle was assassinated. Sergei Witte worked with the Tsar to create a series of laws called "The October Manifesto" , which granted basic human rights and created a democratically elected Duma to represent the people. 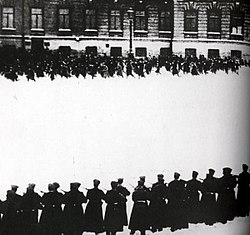 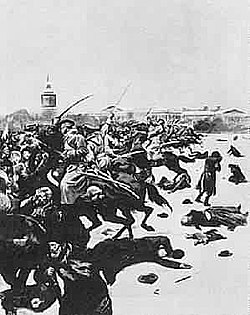 Well on its way to losing a war against Japan in the Far East, czarist Russia is wracked with internal discontent that finally explodes into violence in St. Petersburg in what will become known as the Bloody Sunday Massacre.